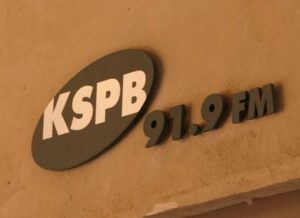 KSPB, Pebble Beach, 91.9 FM is a commercial-free, student-run, radio station, that has been broadcasting from Stevenson School in Pebble Beach for over 40 years.

The station is student run and includes staff positions, from webmaster to program director. Before applying for a live show on air, each student is required to take a class to learn about Federal Communications Commission (FCC) regulations, and how to operate the station independently. The students decide the genre of music for their specific show, but the general programming is alternative rock with specialized shows featuring hip-hop and international music. However, some students prefer to run their own talk shows.

With its connection to the Public Radio Satellite System (PRSS) the station fills out its schedule with content from the BBC World Service, American Public Media, and other public radio producers such as WAMC (Albany) and KCRW (Santa Monica). It also obtains content from its affiliation with the Public Radio Exchange (PRX).

KSPB has listeners in five counties in California – Monterey, Santa Cruz, San Benito, Santa Clara and San Mateo – with a potential total listenership of more than 1 million. Also, with the recent addition of streaming, KSPB is now available worldwide!

Stevenson School is licensed to run KSPB as a Class A non-commercial FM radio station at 1000 watts.