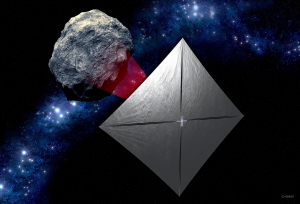 Dave helps profile two NASA missions, one about to begin and one that has just completed. First we preview the NEA Scout mission that will launch aboard the giant Space Launch System as part of the Artemis 1 uncrewed test flight to the Moon. While the moon rocket is massive, the largest since the SaturnV/Apollo era, the tiny cubesat spacecraft NEA Scout is the size of a shoebox. One of the mission’s principal investigators, Les Johnson joins Dave to talk about the mission that will use a solar sail to propel it beyond the Moon to a Near Earth Asteroid. Then Dave has his good friend Josh Willis on to talk about the completion of OMG — Ocean’s Melting Greenland. Josh has been the principal investigator for the program for the past six years and shares how much warming ocean water is dramatically accelerating the melting of Greenland’s glaciers. While it is a weighty subject, we do have a visit from Josh’s alter ego, Climate Elvis, to lighten the mood!