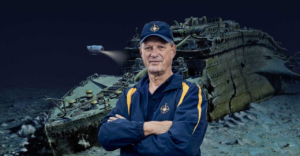 Dave Schlom talks to legendary deep ocean explorer Dr. Robert Ballard about his new book, Into The Deep: a Memoir by The Man Who Found Titanic. Since the late 1960s, Ballard has been exploring the ocean’s depths using a variety of submersible crafts, making fascinating discoveries from the detection of the strange chemosynthetic ecosystems at the Mid Ocean Ridges to iconic shipwrecks like Titanic, Bismarck and President John F. Kennedy’s World War II vessel PT 109. Ocean science has always been an important topic on Blue Dot and on this episode, Dave shares his love of the sea with one of his greatest exploration heroes as well as a playful love of vintage films that makes this interview a bit different from the hundreds that Ballard has done over the years. Ballard also discusses his dyslexia, revealing that while at times it can be a problem when dealing with large amounts of text, it can also be dealt with in positive ways to become an asset.