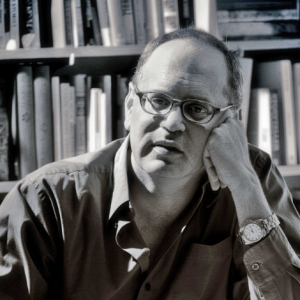 A man who converses on an equal plane with writers of fiction and poetry, often surprising them with his insights, Michael Silverblatt has made Bookworm the country’s premier literary talk-show. Joyce Carol Oates once called him the “reader writers dream about.”

Silverblatt’s formidable knowledge comes from close reading and analysis of a writer’s entire oeuvre. As host and guiding spirit of this weekly show, Silverblatt has reinvented the art of literary conversation, introducing listeners to new and emerging authors along with writers of renown.

I must tell you I have been interviewed to something like excess, but an interview with you is unique. It is an original and you never ask any of the over and over questions that have been so often asked and answered. That makes these conversations with you an unfailing and singular pleasure.

A New York native, Silverblatt graduated from the State University of New York in Buffalo and later took advanced courses at Johns Hopkins. He moved to Los Angeles in the mid-1970’s, working in motion picture public relations and script development. He created Bookworm, for KCRW in 1989.

As a student, he came under the influence of such cutting-edge author-teachers as Donald Barthelme and John Barth; as a radio talk-show host, he learned to appreciate a much wider range of writing – making him, he hopes, “a person of ferocious compassion instead of ferocious intellect.”

With more than two decades’ worth of shows, Bookworm has become one of the best centers to hear the voices of contemporary writing, any time, anywhere, locally and globally via the Internet.

Shows
Bookworm with Michael Silverblatt
Note: Bookworm is on indefinite hiatus as of May 12, 2022 “Michael Silverblatt is the best reader in America.” —Norman Mailer. The Bookworm: a man who converses on an intellectual plane with writers, who reads […]