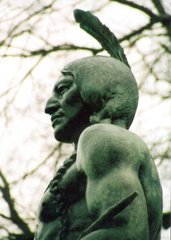 Massasoit was the leader of the Wampanoag Confederacy who negotiated a truce with British settlers of Plymouth Colony that lasted for 40 years in the 1600’s, starting shortly after the first Thanksgiving. This time on Peace Talks Radio, conversation with American Indian scholars and a filmmaker who fill in the details of Massasoit’s attempt to make peace for his people and with the new strangers.